I read something recently that made me sit up straight. Liza, a fellow secret sex blogger, relayed her experiences behind the velvet ropes of writing about a private sex life for an anonymous audience. She wrote for xoJane about the stress of having a secret blog and the pressures to share nude photos (emphasis mine),

The easiest way to get more [traffic] meant traveling a path I resisted. There is tremendous pressure on women sex bloggers to show our bits to the world, to prove we aren’t hideous hags, and to fuel reader fantasies. I’m no prude, but we all have limits, and sharing naked pics on the internet is mine.

On one hand, I proved sex blogging can be sexy without sharing naked snapshots. On the other, I suspect some in the sex blogger world never took me seriously because I refused to take off my clothes. I’m glad I’ve never posted nude photos, and I’m glad the people who do take me seriously are the people who appreciate what I write. I’ve saved countless emails and comments in which readers share how my writing moved them and helped them evince a change in their own sex lives, and that feels amazing. 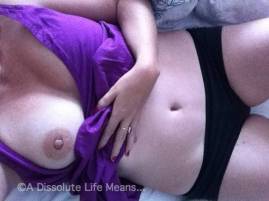 My traffic is the same whether I post nudie pics or not. In fact, some of my most-commented-on and/or popular posts are image-less (Sometimes, I want to shut it all down, I fucked a stranger. While blindfolded. And I was watched., He takes me for granted, and I know how to squirt) or rated PG (Holding my breath, Please excuse my vanity, and Neither of us could resist), therefore I feel as though exposing myself is entirely my choice, not something I have to do to feel taken seriously or to increase my traffic.

And second, I suspect I am no less respected or shown less interest from the sex-blogging community because sometimes I choose to keep it wrapped up; some of my favorite blogs on the planet use only their words (You Linger Like a Haunting Refrain, Leah Lays London, Theo Black, and Story of Alice).

I share my body with you, the world, most simply because I can and want to. It’s naughty, it’s dangerous, it’s exhilarating, liberating, and a big, fat turn on. It may also come as no surprise that I need the feedback. 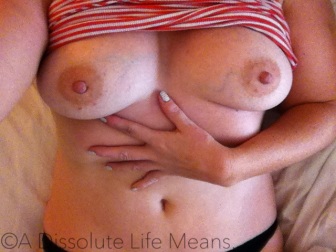 What I get from posting pictures of my body is a sense of self outside of my own head. I see who I am to others reflected in comments and positive words and a passionate kiss from a man who was lucky enough to see the pixels of me earlier that day on his phone. I admit that this is an unconventional approach to a self-esteem, but it works for me.

I reject the notion that I must be all I need to myself, that I should feel beautiful and desirable all on my own. I believe it’s a personal equation for all of us of self and other. It may be that my “other” is a bigger portion than your other, but I’m ok with that. It’s working for me.

I am hanging out to dry every last stitch of my dirty laundry and it is cathartic, titillating, and never-endingly fascinating work. It feels natural to be this open. It’s who I am. Therefore I share my body, in part I suspect, because I am an “attention whore” as N. mentions in his Top 10 Reasons Sex Bloggers Blog Sex. Perhaps that’s the easiest way of categorizing myself — I did just admit to needing attention, after all.

N. could be onto something:

9) We’re exhibitionists who get off on revealing in public what usually is private.

Which brings me to a larger issue in general about exposing oneself online: it is regarded as negative, full stop.

Keeping our bodies hidden from public view is culturally normal in most industrialized countries, but we’re not “culturally normal” here, are we? We read and write about sex when we’ve been raised to believe it is a private act between one woman and one man.

Current cultural mores of our time mean we never express ourselves outside a hetero- monogamous cisgendered norm — or the bedroom — but around these parts, that’s not what we are and it’s certainly not what I am. I am a bisexual, relationship-flexible, sex-positive woman, writer, and exhibitionist. And I show lots of T and A.

I find it odd that a politician can survive sketchy political behavior, even illegal, but if his penis is found on the internet, he is ruined. I shudder to think what would happen to a female politician in a similar situation. She would be labeled “whore” (as if that’s such a bad thing) and every smart, intelligent thing that ever came out of her mouth would be ignored in the shadow of her naked tits because we are uncomfortable with anyone sharing their body with someone outside the confines of a bedroom. 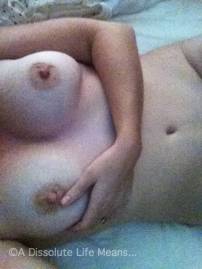 The message we’ve received about nudity is that it is bad.

It’s partly why I started the Boobday project, to show other people out there that sharing your body with others is a powerful statement of choice, power, and sensuality, that it is a compelling instrument of personal emotional change and acceptance and it doesn’t have to be regarded with such side-eye. It’s not trashy.

I am a size 12, have stretch marks and cellulite and I enjoy exposing my body to strangers. Why a person’s life should be ruined because they express sensuality via an image is completely beyond me.  And why nudity somehow devalues the work it resides next to also escapes me.

To all the politicians of the world, I say, “Just make sure the recipient is trustworthy and don’t include your face or any defining markers!”

But I respect anyone who chooses not to — it works for them — and even I am not so open and free as some. I have hard limits, too: I never show any part of my pussy or pubic hair.

I reserve that for trusted lovers only, men who have seen it with their own eyes. I need to keep something forever hidden from the internet’s prying eyes. I share so much with you all here, I need something of just my own and I have decided it’s explicit photos of my naked body, my vagina, in particular. It’s mine, not yours.

New-ish, with some hyacinth blooms.

Sharing naked images is whatever you make of it. For me, it bolsters my self-esteem and empowers me, delivers me attention I crave and provides a platform for discussion of body image, lust, and creativity. I feel no less a creative because I use my naked body in posts. It’s another level of expression, a different kind of art.

And I find those who choose to keep their bodies private for their own lovers no less delectable or interesting. Different strokes for different folks and all that. My only wish is that we could all feel wholly comfortable with our decisions, never pressured and never judged.

I’m curious to learn why others post pictures. Is Liza alone in feeling pushed to post nudity or am I the anomaly? The results will be skewed, I’m sure, since I participate in a fairly nekkid community of writers (and readers) these days. I wish I could put this out to the world at large to see what they would say, but alas, only a certain portion of the population would ever Google “How to squirt” or “I want to fuck my neighbor.”

[Ed. Note: I chose those snippets of Liza’s post because I didn’t relate to them at all. I don’t believe she’s deliberately implying anything about those of us who post pics, but it reads that way each time I go over her entire post.

I have no issue with her feelings about her own blog and herself in it; her piece just inspired me to clarify my own motivations for being such an exhibitionist and why I post naked pictures of myself.

I also wanted to make clear that I felt like my writing was strong enough on its own and that the pics are purely for my emotional benefit, not for traffic’s sake.

I think she’s a talented writer and she shares a rare writing point of view with a smaller number of sex-bloggers, but she certainly doesn’t speak for all of us — not that that was what she was trying to do.]

118 thoughts on “My political career is ruined: I have too many tit pics on the internet.”

What say you? Cancel reply

It takes a lot of time and effort to write decent content for this blog and it's a labor of love, for sure, but any support would be very welcome!

Why I show my tits

My political career is ruined.

I know how to make myself squirt.

A Dissolute Life Means by Hyacinth Jones is licensed under a Creative Commons Attribution-NonCommercial-NoDerivs 3.0 Unported License.
Based on a work at http://adissolutelifemeans.com.